June 24, 2013 — An exotic tree species that changed from prized possession to forest management nightmare serves as a lesson in the unpredictability of non-native species mixing with human interactions, according to researchers. 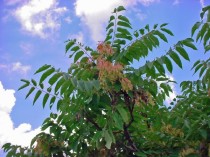 Kasson, who is a post-doctoral researcher in plant pathology, physiology and weed science at Virginia Tech, said that William Hamilton, a pioneer botanist who corresponded with William Bartram and Thomas Jefferson, imported the first ailanthus altissima — Tree-of-Heaven — a tree native to China, from England sometime between 1784 and 1785 and cultivated the tree on his estate, the Woodlands, in Philadelphia. The deciduous tree, which grows rapidly, often to a height of 50 feet, has become one of the biggest forest management problems, especially since the 1980s, according to the researchers.

Kasson and colleagues report in a recent issue of the Northeastern Naturalist that ailanthus can invade quickly in areas where large, continuous stands of trees are cut down — clearcuts — and displace slower-growing native plants. [ … continue ]

I enjoy amateur radio, gardening, beekeeping, birding, and being outdoors.
View all posts by admin →
This entry was posted in Disease & Pests, Information. Bookmark the permalink.
%d bloggers like this: